Warning! Unfortunately your browser has disabled scripting. Please enable it in order to display this page.
03/07/19 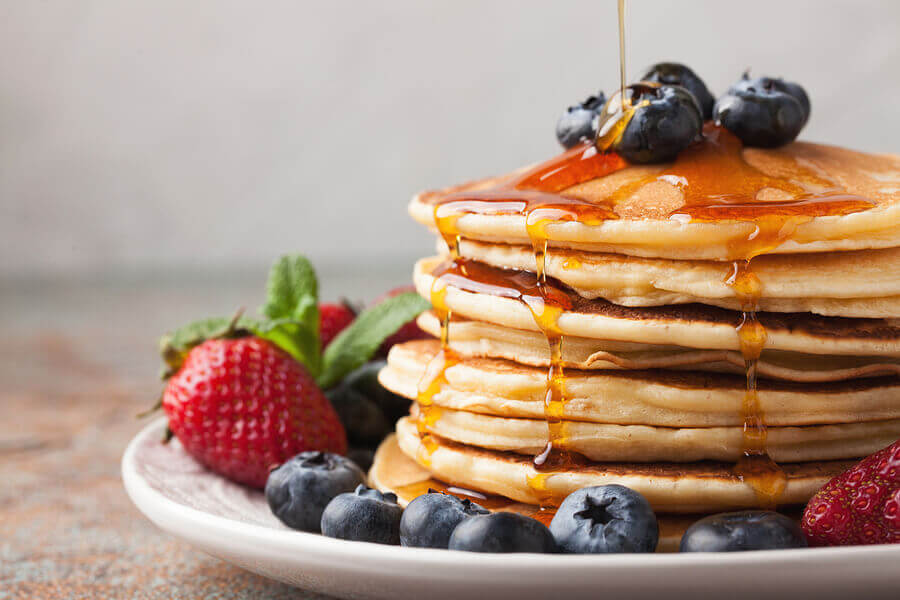 They’re the sweetheart of the American Breakfast. Thick, fluffy and sweet – nothing beats the States when it comes to pancakes. We recommend trying this blueberry pancake recipe or keeping it simple by whipping up plain buttermilk pancakes with a pat of butter, lashings of maple syrup and perhaps a crispy slice of streaky bacon on top.

Check out the recipe here 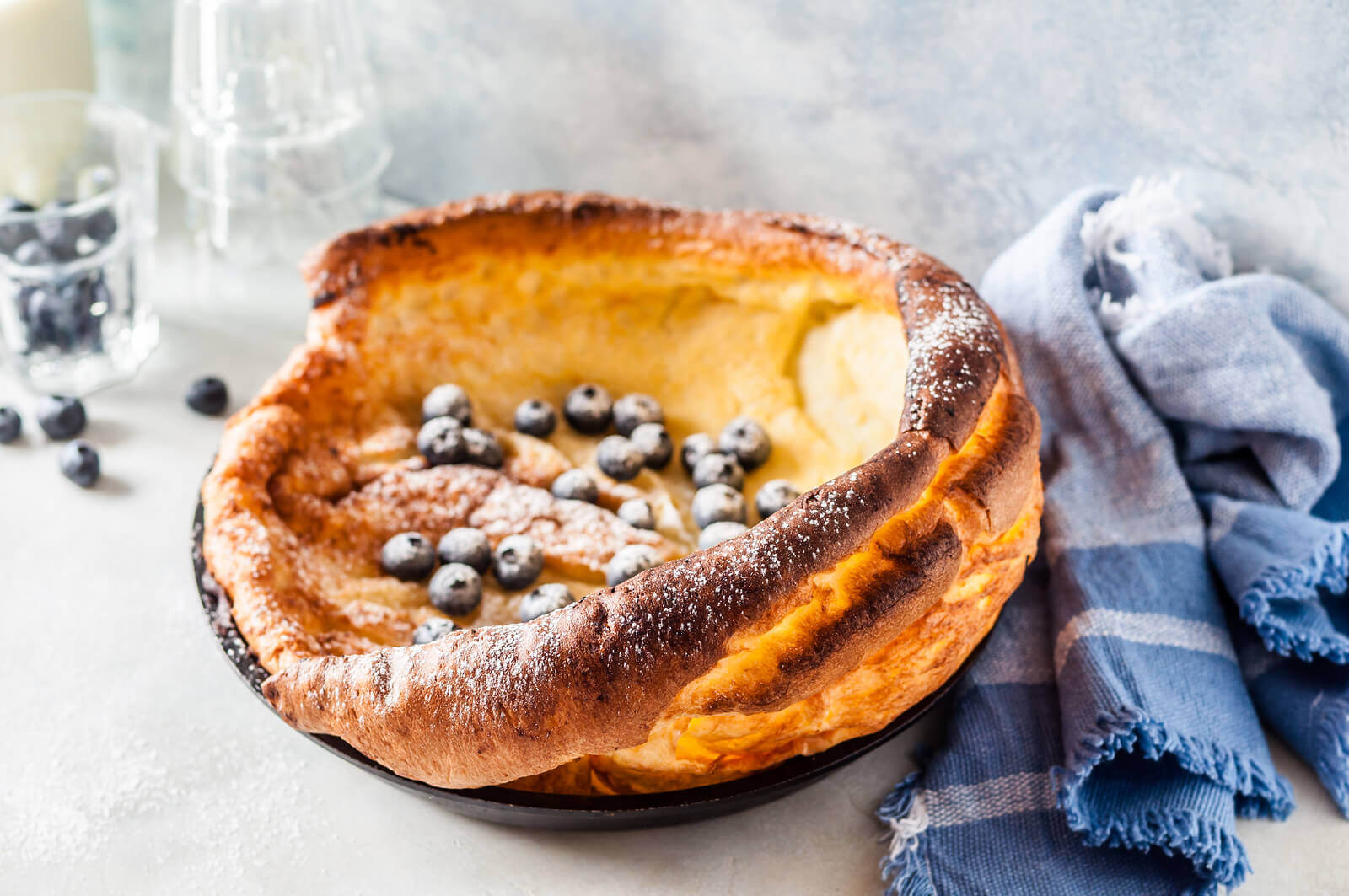 Alternatively, go for a Dutch Baby. They don’t make many appearances on this side of the pond, but we can vouch that they are the fabulous American fusion of pancake and Yorkshire pudding that you didn’t know you needed. 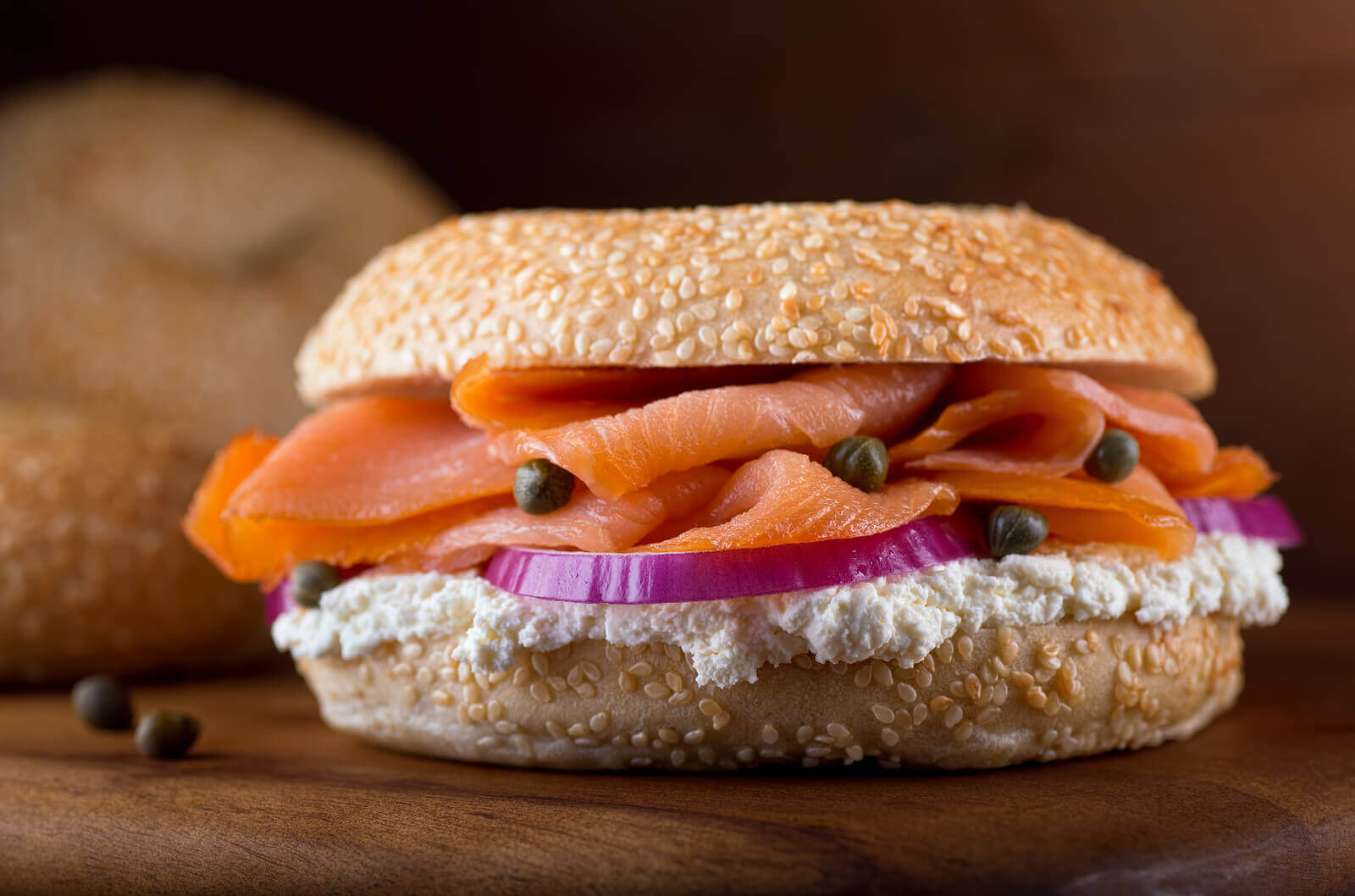 An NYC classic. Bagels are enjoyed all around the world, but their origins lie in Jewish culinary culture and many Jewish people still pair their bagels with smoked salmon and cream cheese on a Sunday.  If you can’t afford the flight to visit an authentic New York deli or street vendor, then follow this delicious bagel recipe and top them with thick cuts of smoked fish and cream cheese. Or just buy a pack!

An essential Los Angeles Breakfast item, the breakfast burrito’s beauty lies in its infinitive flexibility. Settling on a recipe was tricky as you can really chuck anything you want in, but we settled on a hash brown breakfast roll doused in hot sauce that's sure to cure any hangover. 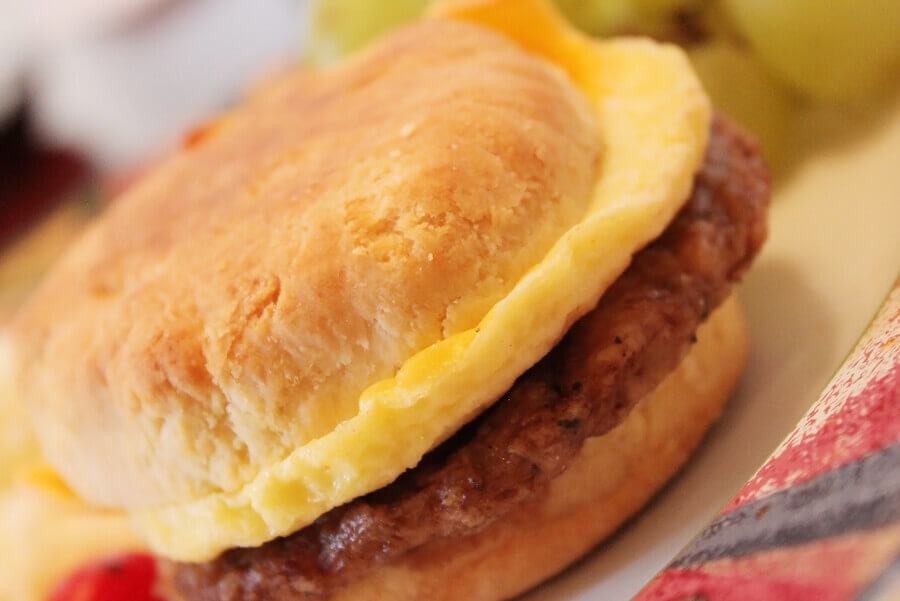 No, we don’t just mean pop into McDonalds - though we certainly wouldn’t judge you. Here’s a great recipe to rustle up your own Sausage and Egg McMuffin, because Maccy’s is about as American as it can get.

Give the recipe a try here 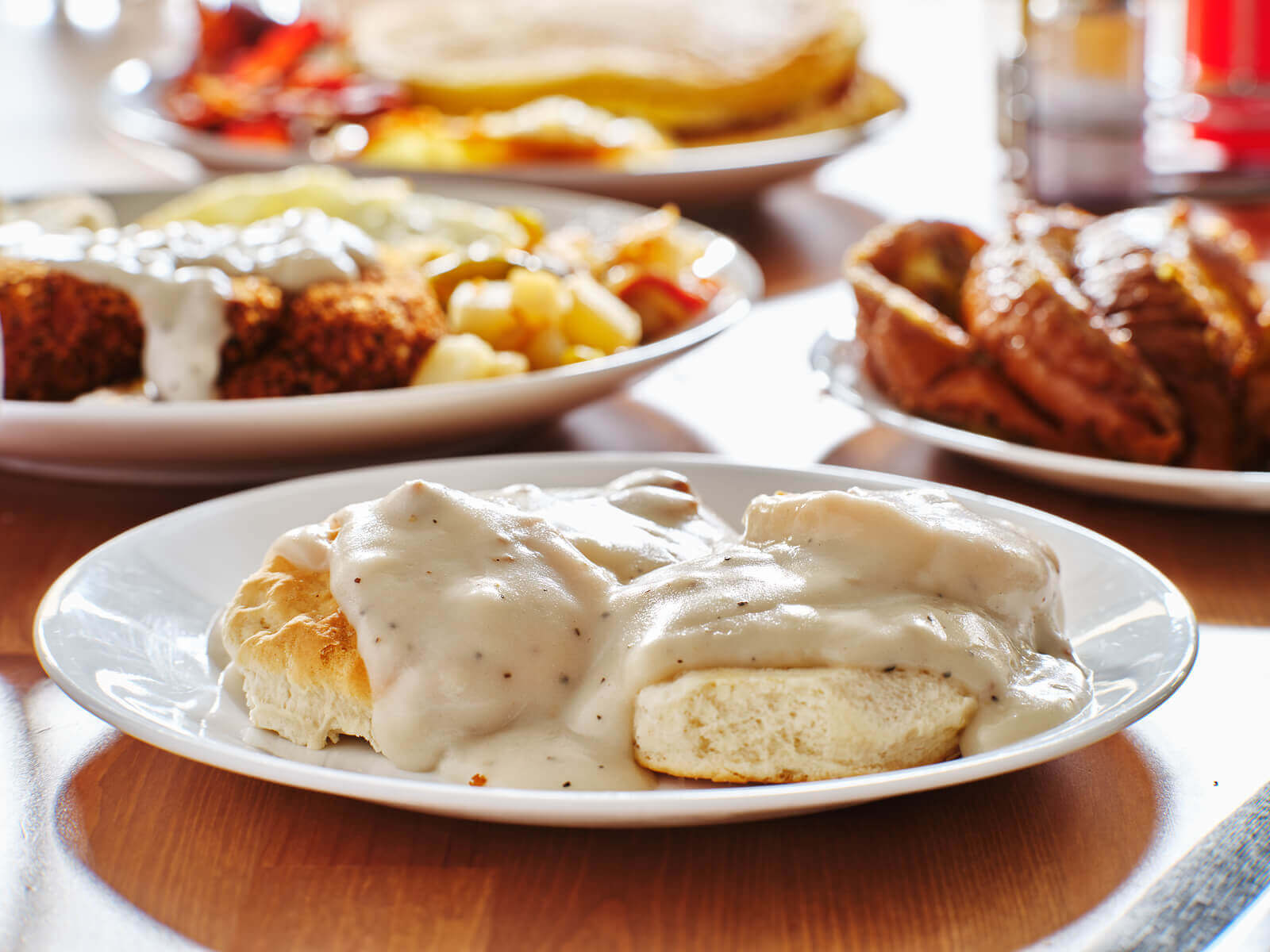 The mysterious American biscuit. What actually is it? While it’s no hobnob that can be dipped into a cup of tea, the American biscuit is a tasty scone-like bake that pairs well with savoury sauces. In this recipe, these American biscuits are paired with a meaty gravy. Give it a try – biscuits and gravy are a classic Breakfast in the South of the United States. 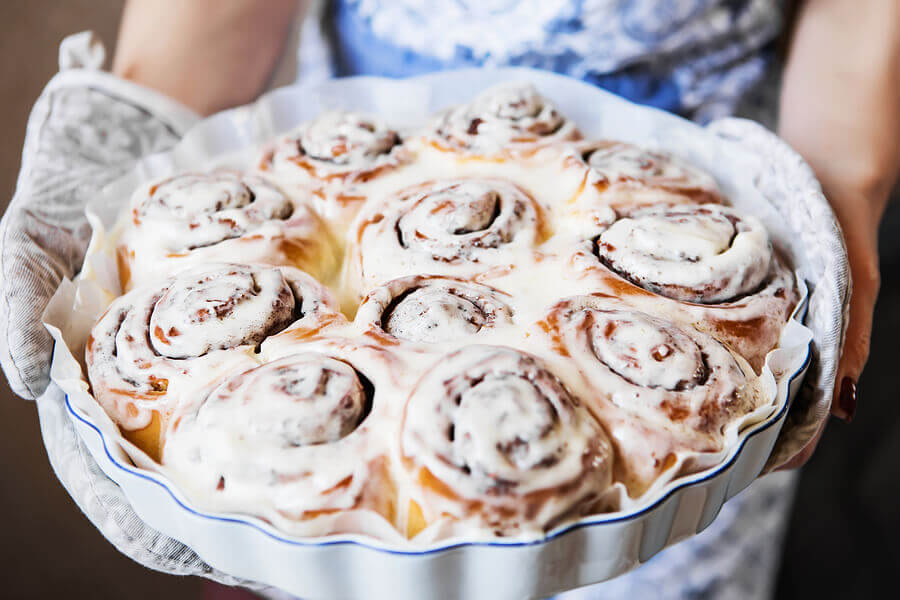 For a seriously sweet breakfast, try out these cinnamon rolls. Americans love their Cinnabons and it’s no surprise - these sticky buns are rolled with a mouth-watering brown sugar and cinnamon filling that sits under a thick blanket of vanilla cream cheese glaze. Drooling!

So, the weekend is upon us, which means you’ve got more time in the morning to treat yourself to a delicious Breakfast. Read more
31/12/19

Whip up something tasty using your leftover Christmas dinner with these six easy recipes. Read more
24/12/19

It's Christmas Eve! There's no better way to get into the festive spirit than with a special winter warmer. Read more
20/12/19

Because there’s more to Christmas Dinner than turkey and pigs-in-blankets. Read more
21/11/19

Happy Stuffing Day! Stuffing is the simple, underrated side-dish to a classic Christmas dinner that is so often overlooked as an essential component to your meal. But why? Read more
17/10/19

Some tasty and heartwarming Brunch recipes you should make this autumn!

Now that the dreaded 'summer bod' season is behind us we can get on with real life, and by that we mean feasting on pancakes, waffles, banana bread and all the other delicious brunch recipes we're going to be gifted this autumn. Read more
11/10/19

Happy National Curry Week! In the UK, we’ve embraced one of India’s greatest gifts to the rest of the world like nowhere else. Read more
05/06/19

In my opinion, Yorkshire puddings are the foundation of a decent Sunday Lunch. And as a Yorkshire lass, it pains me when the food of my people isn’t cooked properly. If they’re not up to standard, then the whole thing might as well go in the bin. Read more
15/03/19

St Patrick's Day is just around the corner so we thought we'd provide you with a barrelful of Irish recipes to soak up your Guinness hangover. Read on for the best Ulster Fry recipe, a boozy breakfast shot and many more... Read more
05/03/19

It’s the most important day of the year – Pancake Day. For some reason that Christmas eve excitement that we lose as adults sticks around for this blessed day of pancakes. Here’s the best pancake recipes to make this evening. Read more
28/02/19

Here's How You Can Celebrate St.David's Day

It's officially the Year of the Pig! Treat yourself to some tasty pork dishes

Ever wondered how they make those delicious sauces at your favourite meat-free spots? Bruncher has got you covered, with a round-up of the easiest and tastiest brunch condiments that you can make from the comfort of your own kitchen. Bon Appetit! Read more
23/12/18

With Christmas now only days away, we are looking further ahead on how to ensure that we don't let any of the precious Christmas Dinner food go to the bin - or the dog! Read more
06/12/18

Now we're well and truly in the festive period, we've rounded up our favourite ideas for what to make for Breakfast on Christmas morning to make sure you start the most wonderful day of the year in decadent style. Read more
14/11/18

The husband and wife duo behind Food and Baker whip up a lovely breakfast dish, ideal for those weekend mornings when you have time to treat yourself... Read more
09/11/18

As if any excuse were needed to gorge on cheese all day, National Cheese Day has rolled around - and with it, we bring you the tastiest, gooiest, cheesiest Brunch recipes to mark the occasion. Read more
07/11/18

Feeling sluggish in the morning? Don't have the energy for a proper cooked meal? Food and Baker have the solution to your breakfast woes, with a delicious and nutritious smoothie bowl... Read more
16/10/18

Who says chocolate is just an evening treat? The most decadent week of the year is finally upon us, the only time (bar Christmas) it’s socially acceptable to munch on some guilt-free chocolate first thing in the morning. Read more
View all news
‹ › Close