Warning! Unfortunately your browser has disabled scripting. Please enable it in order to display this page.
03/09/18

Read any article about the origins of 'Brunch' and an essay published in 1895 will be cited as the first known use of the word. 'Brunch: A Plea' was written for the English periodical 'Hunter’s Weekly' by Guy Beringer, but the original essay is never reproduced in full. The team at Bruncher.com dug a little deeper and located the original article...

When one has reached a certain age, and the frivolities of youth have palled, one’s best thoughts are turned in the channel of food. Man’s first study is not man, but meals. Dinner is the climax of each day. You may have your chasse café afterwards, in the shape of theatre, music hall, or social gathering; but it is little more than a digestive. Dinner’s the thing; the hour between seven and eight is worth all the rest put together. A parallel might be drawn between these sixty minutes and the Nuit de Cléopatre; but neither in length nor moral tendency would it be suitable to HUNTER’S WEEKLY. 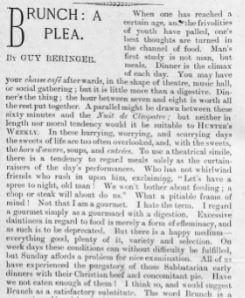 In these hurrying, worrying, and scurrying days the sweets of life are too often overlooked, and, with the sweets, the hors d'oeuvre, soups, and entrées. To use a theatrical simile, there is a tendency to regard meals solely as the curtain-raisers of the day’s performances. Who has not whirlwind friends who rush in upon him, exclaiming, “Let’s have a spree tonight, old man! We won’t bother about feeding; a chop or steak will about do us.” What a pitiable frame of mind! Not that I am a gourmet. I hate the term. I regard a gourmet simply as a gourmand with a digestion. Excessive daintiness in regard to food is merely a form of effeminacy, and as such is to be deprecated.

But there is a happy medium — everything good, plenty of it, variety and selection. On week days these conditions can without difficulty be fulfilled, but Sunday affords a problem for nice examination. All of us have experienced the purgatory of those Sabbatarian early dinners with their Christian beef and concomitant pie. Have we not eaten enough of them? l I think so, and would suggest Brunch as a satisfactory substitute. The word Brunch is a corruption of breakfast and lunch, and the meal Brunch is one which combines the tea or coffee, marmalade and kindred features of the former institution with the more solid attributes of the latter. It begins between twelve and half-past and consists in the main of fish and one or two meat courses.

Apart altogether from animal considerations, the arguments in favour of Brunch are incontestable. In the first place it renders early rising not only unnecessary but ridiculous. You get up when the world is warm, or at least, when it is not so cold. You are, therefore, able to prolong your Saturday nights, heedless of that moral “last train”— the fear of the next morning’s reaction. It leaves the station with your usual seat vacant, and many others also unoccupied. If Brunch became general it would be taken off altogether; the Conscience and Care Company, Limited, would run it at a loss. Their receipts on the other days of the week would, however, be correspondingly increased, and they would be able to give their employés a much-needed holiday. The staff has become rather too obstinate and officious of late.

That it must be a case of Brunch or morning church I am, of course, aware ; but is any busy work-a-day man in a becomingly religious frame of mind after rising between eight and nine o’clock on his only “off” morning? If he went to bed in good time the night before, well and good; but Saturday is Saturday, and will remain so. More especially from seven onwards.

To a certain extent I am pleading for Brunch from selfish motives. The world would be kinder and more charitable if my brief were successful. To begin with, Brunch is a hospitable meal; breakfast is not. Eggs and bacon are adapted to solitude; they are consoling, but not exhilarating. They do not stimulate conversation. Brunch, on the contrary, is cheerful, sociable, and inciting. It is talk-compelling. It puts you in a good temper; it makes you satisfied with yourself and your fellow-beings. It sweeps away the worries and cobwebs of the week. The advantages of the suggested innovation are, in short, without number, and I submit it is fully time that the old régime of Sunday breakfast made room for the “new course” of Sunday Brunch.

P.S.— Beer and whiskey are admitted as substitutes for tea and coffee.

View image of the original